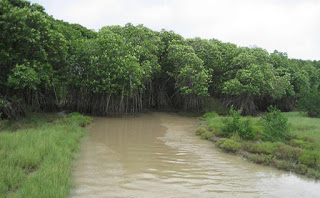 Bhubaneswar, Nov 3: A five-member Assessment Team from
International Union for Conservation of Nature (IUCN) consisting of wild life
scientists, environment specialists and eco-spot experts would visit
Bhitarkanika sanctuary on Friday to assess the eco-site from various aspects.
The team would visit the sanctuary after it was nominated as
one of the nine natural eco spots to be included as a World Heritage site.
The team members on Thursday interacted with senior officers
of the State in a high level meeting held under the chairmanship of Chief
Secretary Aditya Prasad Padhi and discussed about the plan.
The team would assess the eco-site from various aspects. The
issues relating to protection, conservation, bio-diversity, inclusiveness of
the area, people’s participation, tourism potential, livelihood of the people,
environmental quality etc would be examined by the team. The team would make
recommendations to the World Union about its inclusion.

Speaking about the community participation in maintenance of
eco-sites, Development Commissioner R Balakrishnan said that respect and love
for the natural eco-sites is an inherited part of Odishan culture for which a
number of eco-sites along the coast and hill tracks have been conserved and
developed through time.
Principal Secretary Forest and Environment Suresh Chandra
Mohapatra along with Conservator of Forests Sidhant Das outlined the physical,
environmental and management features of Bhitarkanika. It was declared as protected forest in the year
1961. Later 672 kms of its area was declared as Wild Life sanctuary in 1975 and
its core area of 145 kms was declared as National Park in 1998.
It was declared as a Ramsar site in the year 2002 while in 2008
Bhitarkanika was inscribed in the tentative list of World Heritage sites. The
forest has more than 300 plant species of about 80 families including 94
species of mangroves and associates of 28 families.
It has other unique features like largest number of salt
water estuarine crocodiles in the world, 300 species of indigenous and
migratory birds and mass nesting of olive riddle seas turtles. It has also 24
species of crabs and two species of horseshoe crabs. Community management system and peoples’ participation in
development of the area are other important features of the site.