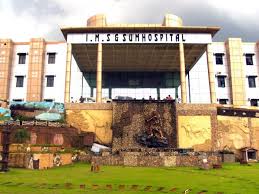 Bhubaneswar, Nov 3: The SOA University on Thursday paid
ex-gratia of Rs 5 lakh each to the next of kin of three persons who had lost
their lives in the fire accident at the Institute of Medical Sciences and SUM
Hospital here on October 17.
The three deceased persons whose families were paid the
ex-gratia in the first phase are Lochhaman Baral, Jogendra Kumar Das and
Manaswini Sarangi. While Baral and Das belonged to Begunia in Khurda district,
Sarangi was from Jankia in the same district.
The disbursement was made on the basis of identification of
the recipients established by the Government agencies.
At least 29 persons were reportedly died in the fire. The State
Government also has announced Rs 5 lakh each to the next of kin of the deceased
persons. Both the SOA and State Government too announced to bear medical
expenses of the injured persons.