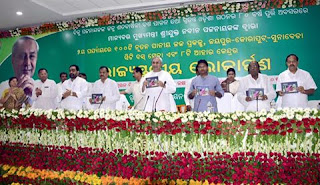 Bhubaneswar, June 30: Chief Minister Naveen Patnaik on
Thursday dedicated a number of projects on drinking water, food security and
public transport to the people of the State as part of Biju Centenary
celebrations through videoconferencing.
The Chief Minister dedicated 100 new urban piped drinking
water supply projects which will benefit around 2 lakh people across 46 cities
and towns under 21 districts.
Combined with the 100 projects launched earlier, piped water
supply has now been ensured to 33 percent of urban households benefiting more
than 60 lakh population. Total water supply has been assured for 1209 of 2008
wards in urban local bodies while 672 have got partial supply.
“It is my Government’s commitment to ensure safe drinking
water supply to every household and we are striving relentlessly in that
direction. Along with tanker water supply to scarcity hit areas, control rooms
have been set up for immediate restoration of services during breakdown,” said
Patnaik.
Reiterating our mission to provide ‘Food For All’, Aahar
centres have been expanded to eight more towns including Udala and Karanjia in
Mayurbhanj district, Anandapur in Keonjhar district, Nilagiri in Balasore,
Chandikhole in Jajpur, Kamakhyanagar in Dhenkanal and Konark in Puri district.
With the new additions, total centres have gone up to 110, covering all
districts and offer affordable meals to more than 2 crore people in a year.
The Jeypore-Koraput-Jeypore City Bus service will
significantly enhance public transport services and improve connectivity,
benefitting over 2 lakh people in Koraput district.
I interacted with beneficiaries through video-conferencing
and received their valuable feedback and suggestions for ensuring basic
amenities in the urban areas.