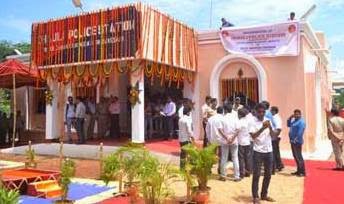 Bhubaneswar, Sep 8:Chief Minister Naveen
Patnaik on Monday inaugurated Dhauli police station near Dhauli peace pagoda. With
the set up of this new PS the number of police stations under Commissionerate
Police reaches 43.
According to sources,
the new police station building constructed at the cost of Rs 77 lakh will have
two SIs, two ASIs, one Havildar  and 10
constables except the IIC. Bimalendu Mohanty was appointed as the first IIC of
the Dhauli police station.
Its jurisdiction extends
over an area of 10.7sqkm covering four gram panchyats-Sisupalgarh, Tikarpada,
Itipur and Dhauli and Nuagaon and Diyavihar area of Bhubaneswar Municipal
Corporation. As many as 33 villages will come under the jurisdiction of the police
station.
Tourism and Culture
Minister Ashok Panda, DGP Sanjeev Marick, Bhubaneswar-Commissioner of Police Dr
RP Sharma were also present.
The Chief Minister had
laid the foundation stone for the police station building in April last year.
Sources said this new
police station will provide better security to visitors coming to the tourist
spot.