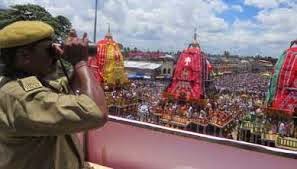 Bhubaneswar, Sep 17: In a bid to strengthen intelligence
network ahead of Nabakalebara festival (formation of new idols) at the
Jagannath temple in Puri, slated to be held in 2015, the Odisha Government has
created a total of 22 posts to work at District Intelligence Bureau, Puri.
The appointment which will be done purely on temporary basis
will stand automatically abolished after September 30, 2015, said sources in
the Home Department.
The posts created, include two Sub Inspector, two ASIs, three
Havildars and 15 Constables.
Around five to seven lakh people visit Puri during the annual
Rath Yatra while around 10 lakh people had visited the beach town during the
last edition of Nabakalebar in 1996. However, the government anticipates the
size of the crowd may go up five times in 2015 because of better connectivity
to Puri these days.
Senior police officials are reviewing the security arrangements
regularly to ensure a hassle free festival.