Skip to content
—
Efforts on to close 4 breaches, three dead so far 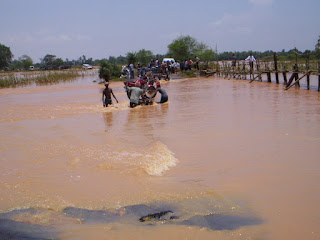 Bhubaneswar, July 31: Though
the flood situation has improved as the rainfall considerably decreased during
last three days, about 4.79 lakh people of 593 villages under 15 blocks and one
urban local body in five districts, Mayurbhanj, Keonjhar, Jajpur, Bhardak and
Baleswar have been affected by the current spell of floods.
All three major rivers
the Baitarani, the Budhabalang and the Subarnarekha in the northern Odisha
which had experienced high flood have receded while all other rivers in the
State are flowing much below the danger level, said SRC GVV Sarma.
Meanwhile, water from
all villages which were marooned were cleared barring 10 villages under
Bhogarai block in Baleswar and 10 other villages in Dasarathpur block in Jajpur
district. Most of the evacuated people have returned to their home except 55
persons residing in one relief camps in Bhogarai block.
Efforts are on to close
four breaches occurred near Ganeswarpur in Baitarani in Jajpur, near Khaljori
in Chandabali block of Bhadrak in Baitarani, near Dahamunda of Bhogarai block in
Subarnarekha in Baleswar and near Panchupada in Dasarathpur block in Kani in Jajpur
district.
The Collectors of the
northern districts have been kept on alert to meet any exigencies in view of
the prediction of more rainfall under the influence of cyclonic storm Komen.
So far three persons
have died and one is still missing in the flood.