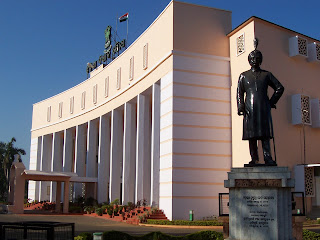 Bhubaneswar, Aug 23: A day-long special session of the Odisha
Legislative Assembly has been convened on September 1 to ratify the Goods and
Services Tax (GST) Bill passed by both Houses of Parliament recently.
The decision in this regard was taken on Tuesday at a State Cabinet
meeting chaired by Chief Minister Naveen Patnaik at the State Secretariat.
The Constitution (122nd Amendment) Bill, 2014 on GST has
already been passed by the Lok Sabha and the Rajya Sabha.
“As per rule, at least half the States will ratify the
constitution amendment Bill on Goods and Services Tax within the 30 days from
day the Parliament passed it. It needs to be ratified by at least 15 State
legislatures So the State Cabinet has decided to convene a special session to
ratify the GST Bill on September 1,” said Chief Secretary AP Padhi after the
meeting.
The President can notify the GST Council which will decide
the new tax rate and other issues only after 15 State Legislatures ratified the
Bill.
Assam became the first State to ratify the Bill followed by
Bihar, Jharkhand and Himachal Pradesh. Bihar became the first non-NDA State to
ratify it.
The Union Government has set a target to could roll out the GST
even in the middle of the year if it failed to do so at the start of the fiscal
year on April 1.
GST aims to do away with multiple-tax regime on goods and
services and bring them under one rate.
Meanwhile, the State Government has deferred the ensuing Monsoon
Session of the State Assembly in view of Nuakhai festival in western Odisha.
The Monsoon Session would to begin from September 21 instead
of September 7.