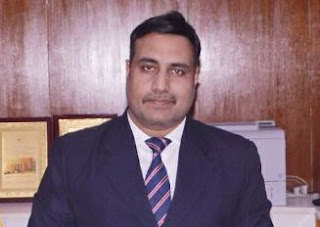 Sambalpur, Aug 29: Munawar Khursheed, a 1992-batch Railway Protection
Force (RPF) officer, on Monday took over the charge as the seventh Chief
Vigilance Officer (CVO) of Mahanadi Coalfields Limited, a flagship subsidiary
of Coal India Limited, under Ministry of Coal.
Prior to the new assignment he was the in-charge
IG/RPF-cum-Chief Security Commissioner at the SEC Railway/Bilaspur
(Chhattisgarh).
The CVO acts as distant arm of Central Vigilance Commission
to check corruption and strengthen anti-graft measures in an organisation.
An expert in anti-insurgency operations, Khursheed was
decorated with Indian Police Medal for meritorious service by His Excellency,
the President of India in 2014.
The CVO is also a recipient of UN Medal for Excellence in
Service (2011), National Award for Outstanding Service (2013), Railway
Minister’s Medal (2013) among several awards and recognition for his
distinguished service.
An alumni of Delhi School of Economics, SVP National Police
Academy and Administrative Staff College of India, Khursheed was trained abroad
at Louisiana University, under the aegis of Department of State-USA,
Peacekeeping Operations Institute-Geneva, UN Training Centre-Khartoum (Africa)
and Baton Rouge Police Academy-USA.
“I look forward to fulfill the assigned agenda and implement
the guidelines and directives of the CVC, in their true letter and spirit, for
the noble ideal of a transparent and corruption-free working environment,” said
the CVC.

Cong review on poll debacle from Aug 27 in Odisha