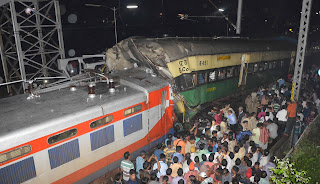 Cuttack, Sep 29: Two people, including a woman have been
reportedly killed and several injured in a collision between a Passenger train
and a Goods train moving in a single track near Kathjodi Station here on
Thursday evening.

Railway sources said
the Bhubaneswar-Bhadrak passenger train hit the goods train from behind
allegedly due to wrong signal on the track at around 6.30 pm.
Following the accident, the East Coast Railway (ECoR)
launched helpline numbers (0674) 2490670, 2301525, 9437579238 .
Soon after the accident locals, police and railway rescue
team rushed to the spot and rescued people. All the injured persons have been
rushed to the SCB Medical College and Hospital, Cuttack.
Police officials informed that ambulances were arranged on
the spot and the injured have been taken to SCB Medical College and Hospital.
The reason of the collision is not clear yet, however it is being speculated
that a lack of communication between the two vehicles might have triggered the
accident.
Following the incident, trains along the route were halted at
various places.
Meanwhile, accident relief and medical vans have been rushed
to the spot for rescue operations.
Bhubaneswar-Cuttack Commissioner of Police YB Khurania, Cuttack
DCP Sanjeev Arora, Cuttack district Collector Nirmal Chandra Mishra and DRM
(Khurda) and Railway Chief Safety Officer (ECoR) have also rushed to the
accident site.
Meanwhile, Chief Minister Naveen Patnaik announced free
treatment to the injured.