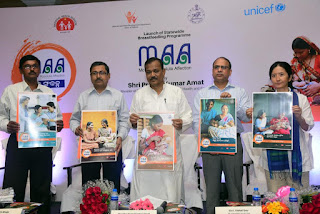 Bhubaneswar,
Oct 25: Health and Family Welfare Minister Pradip Kumar Amat on Tuesday launched
the statewide breastfeeding programme-MAA (Mothers Absolute Affection), a
flagship programme for promotion of breastfeeding here.
The
programme seeks to improve family and community awareness about the importance
of early and exclusive breastfeeding; strengthen counseling of mother through
ASHA workers and provide support to mothers in public health facilities on how
to correctly breastfeed the baby.
In
Odisha, the initiation of breastfeeding within one hour of birth has improved
from 55 per cent in 2005-06 as per the National Family Health Survey-3 (NFHS)
to 73 per cent in 2013-14 as per the Rapid Survey on Children (RSOC) and
exclusive breastfeeding in the first six months of life moved from 51 per cent
in 2005- 06 (NFHS 3) to 69 per cent in 2013-14 (RSOC).
“More
initiatives are needed to be chalked out to facilitate 100 per cent breastfeeding
and nothing else,” said Amat.
Speaking
on breastfeeding and infant and young child feeding in Odisha, Unicef Odisha
chief Yumi Baethe said the Unicef is pleased to support this commitment of the
State Government and the rollout of this important programme in letter and
spirit.
Women
and Child Development (WCD) Secretary Vishal Dev said that for successful
implementation of the programme a multi-sectoral approach in collaboration with
departments such as Health, Women and Child Development, Panchayati Raj and
Rural Development is required.
Early
and exclusive breastfeeding is one of the most cost-effective interventions for
a healthy baby. Breastfeeding within the first hour of birth is vital for the
survival of the child and of the mother. Mother’s milk only in the first six
months of life ensures maximum protection against under-nutrition, illness and
death.