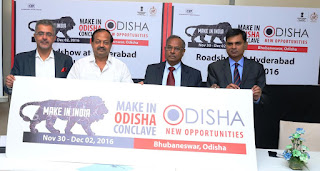 Bhubaneswar,
Oct 25: Ahead of the Make in Odisha conclave, the Odisha Government on Tuesday
organised a road show in Hyderabad to attract investments the State.
Industries
Minister Debi Prasad Mishra along with a high-profile delegation participated
in the road show and made a strong pitch for Odisha explaining why the State should
top investment decisions.
“The
State of Odisha has a progressive industrial policy and robust industrial
infrastructure ecosystem. Good governance, single window facilitation and
best-in-class incentives, and above all, an industry-friendly State Government
which is committed to making starting and doing business an easier proposition
are reason enough to set up operations in Odisha,” Mishra told a large assembly
of CEOs of various companies.
“The new Odisha Industrial Development Plan:
Vision 2025 focusing on five key sectors including ancillary and downstream in
metal sector, agro and sea food processing, electronics manufacturing,
chemicals, plastics and petrochemicals and textiles including technical
textiles through which we aim to attract investments to the tune of Rs 2.5 lakh
crore and generate direct and indirect employment opportunities for 30 lakh
people,” Mishra said.
The
road show was organised by the State Government in collaboration with
Department of Industrial Policy and Promotion (DIPP), of the Union Government and
the Confederation of Indian Industry (CII) ahead of the Make-in-Odisha Conclave
scheduled for November 30 to December 2 in Bhubaneswar.
The
Odisha delegation which comprised senior Government officials and industry
members, sought to showcase the manufacturing process of Odisha as well as
invite companies to the Make-in-Odisha Conclave.
It
also met over 30 companies in Hyderabad and held one-to-one meetings with
companies and organisations such as Penna Cements, Bharat Biotech, MIDHANI,
KIMS, Hyderabad Foods Ltd, Virinchi Ltd, ADP, Konaseema Gas Power & Pennar
Industries, etc., and made a strong case for Odisha as a rewarding investment
destination.
It
listed the competitive advantages of Odisha as a manufacturing destination and
shared information about more than 200 ‘ready-to-invest’ projects in diverse
sectors and areas including industrial parks, textiles, healthcare,
manufacturing, food processing, urban infrastructure, petrochemicals, tourism
and downstream industries. Besides explaining what the state Government has
done on the ease of doing business front, the Odisha delegation also showed the
industry leaders slides to drive home why the ‘cost of doing business’ in
Odisha is lower.