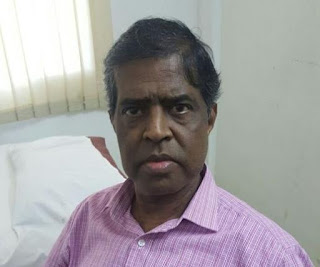 Bhubaneswar,
Oct 28: The Court of Second Additional District Judge, Khurda on Friday granted
bail to Institute of Medical Sciences and SUM Hospital chairman Manoj Ranjan
Nayak and superintendent Pusparaj Samantsinghar, both arrested in connection
with the massive fire at the hospital on October 17.
While
directing Nayak and Samantsinghar to furnish a bond of Rs one lakh each along
with two sureties each for a like sum, the judge told all the appellants to
extend their cooperation to the police and also to desist from any attempts to tamper
evidences.
Earlier
on Thursday, Judge Shyam Sundar Das concluded the hearing and reserved its verdict.
The
court reserved its order in the case after hearing both the defence and
prosecution for around two hours.
The
Khandagiri police arrested Nayak on October 20, three days after the
devastating fire ravaged the hospital killing 27 persons. Prior to this,
hospital superintendent Pusparaj Samantasinghar had been arrested along with
three other staffs on October 18.
Currently,
they all are lodged at the Jharpara Special Jail here. They were arrested
basing on an FIR of the Fire Services Department.
Meanwhile,
police issued summons against Nayak’s wife Saswati Das and sister Arati Ranjana
Nayak and two other trustees of the Siksha ‘O’ Anusandhan Charitable Trust,
which runs the SUM Hospital, for questioning in connection with the fire mishap.
These
trustees were asked to depose before the police within seven days.
Notably,
Saswati and Arati have on Wednesday moved the Orissa High Court seeking
anticipatory bail.

Centre did not ask Chhattisgarh to halt work on Mahanadi: Naveen