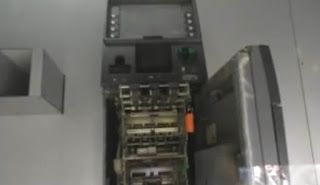 Bhubaneswar, Nov 4: Unidentified burglars broke open two ATMs
in Bhadrak on Thursday night and decamped with over 30 lakh cash. The miscreants
cut open the ATMs using gas cutters.
Bhadrak police have formed special teams to trace and nab the
culprits.
The miscreants looted two ATMs of Axis and ICICI Bank
situated at Randhia Bazaar and the SBI ATM located at Kuansa under Bhadrak
police limits.
Sources said the money looted from SBI ATM amounts to Rs
16,48,900, Rs 7,11,900 was looted from ICICI bank ATM and Rs 6.06 lakh from
Axis bank ATM.
The miscreants used gas cutters to make the robbery possible.
The looters torched the ICICI bank ATM before fleeing the spot.
Police suspect the same gang in these cases as the two
robberies were identical.
Sources said there were no security guards in the ATMs. After
looting the outlets, the burglars close the shutters and fled from the spot.
The incident came to light on Friday morning when the public gone to withdraw
the money.

Dos and don’ts after flood