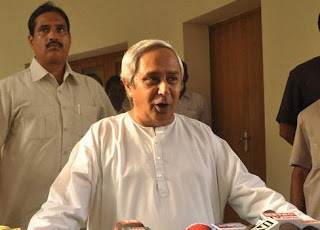 Bhubaneswar, Nov 4: Odisha  Government on Friday welcomed the GST
Council’s decision for adopting zero tax rate on common food items and reducing
tax rate from six to five per cent by the GST Council.
Patnaik also hailed the decision to recommend compensation by
the Central Government to the States on implementation of GST with 14 per cent
growth on collection of tax for the base year 2015-16, said a Chief Minister’s
Office (CMO) release.
However, it opposed the decision to continue collection of
Clean Environment Cess on coal for compensation to all the States.
“However, Odisha Government has always been of the view that
the introduction of Cess will distort the GST structure. Therefore, the
decision to continue Clean Environment Cess on coal etc. for compensation to
all the States has been opposed by us,” said a CMO communiqué.
“The State Government
will continue to pursue the Central Government for enhancing royalty on coal
and sharing most of the Cess collected on coal among the coal bearing States
instead of the same being shared for compensating all the States for
introduction of GST,” the release said.