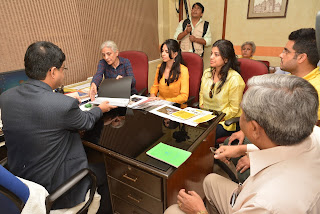 They also sought sought  action against Balasore district police officials who are allegedly patronising the cattle-smugglers.
“Repeated pleas to the police to enforce the animal welfare
laws and to protect the mute animals against smuggling and slaughter have
fallen on deaf ears,” the letter addressed to the Chief Minister read. The letter was handed over to
the Resident Commissioner of Odisha.
“It is common knowledge that smuggling of cattle from Odisha
into West Bengal is rampant and the police largely turn a blind eye to the
crime or are hand-in-glove with the cattle mafia. The police complicity in the
crime is what explains its alarming proportions,” explained Luthra
The demonstration organised by the Dhyan Foundation,
supported by the PFA, under the banner of ‘United Humans Against
Atrocities  on Animals’, was attended by
about 200 animal welfare activists.
The participants shouted slogans like “Band Karo Band Karo,
Gau Hatya Band Karo” and “Har Har Mahadev.”
The banners read, “gau hatya desh hatya” and “gau bachao desh
bachao.”
Balasore police officials named in the letter are  DSP(Crime) and SDPO Amresh Panda, Khantapada
IIC Sudarshan Das, Jaleswar PS IIC Chandan Gadhai, Sadar IIC Dayanidhi Dash and
Industrial IIC Paresh Rout.
According to Gau Gyan Foundation, on an average, 100 trucks,
sealed containers and pick-up vans laden with cattle pass through Balasore each
day, mostly during the night and wee hours of the morning. A daily average of
5,000 cattle is smuggled into the slaughter houses of West Bengal and
Bangladesh, the foundation alleged.