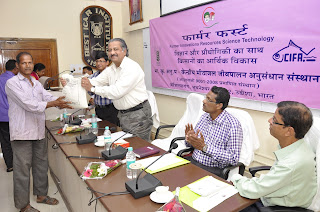 Bhubaneswar, Nov 29: Fish forms the main source of animal
protein in the food basket almost half of Indians.  Of the 9.58 million metric tonnes (2013-14)
annual fish production from the freshwater, marine and brackish water sector,
only a fraction is being exported and the bulk caters the domestic market. Even
then, the current consumption levels at 7.02 and 9.06 kg/capita/yr for the
rural and urban population, respectively, are below the ICMR recommendation at
11 kg/capita/yr and much below the same in the developed countries. It is
estimated that the average per capita consumption for fish would increase to
11.6 kg by 2050. Such higher fish requirement coupled with the population
growth put the required fish production at approximately 16.9 to 22.4 MMT in
2050, which is almost double the present level.
At present, the inland sector with fish production at 6.14
MMT contributes the major share (64.1% of total) of the total fish produced in
the country. While fish production from the marine capture has been almost
stagnant at 3.0-3.5 MMT during last decade, the brackish water sector has
almost been synonymous with the shrimp farming and catering to the export
market. Both marine and brackishwater aquaculture sectors have their
limitations with problems of large scale adoption to increase the fish
production. Such situations leave the entire responsibility of bridging the
future gap of additional 9.0-10 MMT fish requirement on the freshwater sector
and more particularly on the aquaculture sector which contribute more than 83%
(5.1 MMT) of the inland share.
The most important challenge the freshwater sector faces
today is how to bridge the future gap of demand and supply of fish. Further,
the increased production has to be achieved against the odds of land, water and
labourer scarcity, climate change effect and
complying to the task to (i) increase farm income in the face of low
market value of carps,  the main stay of
Indian aquaculture, (ii) preserve the species diversity in the face of their
dwindling stock in the nature, (iii) produce varied fish protein to satisfy
diverse consumers’ choices, (iv) increase fish production per unit use of land
and water, and  (vi) produce fish in a
sustainable and environment friendly manner. Of the 2.414 ha of potential area
in the country available for aquaculture, almost 60 % is at present utilized.
Horizontal expansion even up to 100% utilization level of pond resources may
not be sufficient to cater the fish demand. Therefore, vertical increase in the
average productivity of the culture system is the need of the time to raise the
present level of 2.9 t/ha to a level higher than at 5.0-6.0 t/ha. This can be
realized with adoption of the modern tools and techniques developed in the
sector during the last 70 years of research in the country and elsewhere in the
world. Diversification of the aquaculture species and systems is one of such
important technique that provides enormous scope to utilize the different water
bodies and ensures effective utilization of the resources with increased
productivity level. Fortunately our country has a very strong diversity of fish
fauna in our natural freshwater system. Of the 900 plus freshwater species
reported in the country at least 40 have been shown to have culture potential
as food fish while a large number of indigenous small fish have ornamental
value. Such a strong diversity provides enough scope to diversify our
freshwater aquaculture system to increase its production.
In India, substituting the entire major carp component from
the culture system is a remote possibility. In such situation, successful
introduction of any new species largely depends on its compatibility with the
major carps and performance in the grow-out system since polyculture with carp
is the most feasible option. Attempts towards diversifying the aquaculture
system by ICAR-CIFA during last decades have shown enough possibilities to
incorporate more than two dozen of species into our culture system. Since
availability of seed is a pre-requisite, mass scale seed production and rearing
technologies for these new species have already been standardized in ICAR-CIFA
and elsewhere in the country. Efforts are also on to bring new-species under
the culture umbrella. The Institute also has developed grow-out farming
technologies for several potential species that includes minor carps, barbs,
catfishes, murrels, etc.
In the above context ICAR-CIFA organised the national seminar
on ‘Aquaculture Diversification: the way forward for Blue Revolution’ to
promote the culture and conservation of indigenous fish species through
diversified aquaculture system which may support rural livelihood and the
national food security.