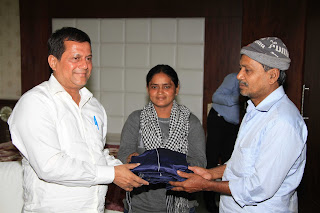 Bhubaneswar,
Nov 28: Reshma Begum (31), a well-known former footballer of Odisha, has been
appointed as the football coach at the Kalinga Institute of Social Sciences
(KISS) here.
She
was appointed after KIIT and KISS founder Dr Achyuta Samanta came to know about
her plight and wanted to extend help. Reshma, in her 12 years of career
beginning in 1999, was looked up as a rising football star until personal
setbacks put a full-stop on her journey and she was struggling to eke out a
living.
All
had been going well for Reshma when back-to-back personal tragedies adversely
impacted her life. She lost her elder sister due to illness, and she herself
developed a medical complication for which she had to undergo a surgery. Her
diabetic father, who sold eggs, had to seek help of locals for Reshma’s
treatment. As the father grew old, Reshma had been moving from pillar to post
for her livelihood without any help.
Getting
appointment at the KISS, Reshma thanked Dr Samanta for his support to a poor
girl. “I’ll try to produce more footballers from the KISS by utilising my
talent,” she said.
Expressing
his happiness, Dr Samanta said, “I am glad that she will be a part of the KISS
and produce more Reshma Begums.”