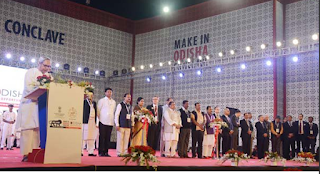 Bhubaneswar, Dec 3: Adventz Group chairman Saroj Kumar Poddar
unveiled the expansion plans of the flagship group company Paradeep Phosphates
Ltd (PPL) during the plenary session of the Make in Odisha conclave here
recently.
Highlighting the ambitious expansion plans, Poddar informed
that PPL, a classic case study in turnaround from a sick PSU to a consistently
profit-making entity- has recently completed sulphuric acid plant expansion
project (2000 MTPD of Sulphuric acid and 23 MW power generation) in March 2016
at an investment of over Rs 600 crore.
Further the proposed coal based ammonia, urea Brownfield
Project with an investment outlay of Rs 9,500 crore is in pipeline for which
environmental clearance by the State Government is awaited. The project is
likely to generate direct and indirect employment opportunities, he said.
Although the fertiliser industry is passing through a
challenging phase, Adventz Group and PPL are committed to play a catalytic
role, Poddar said.