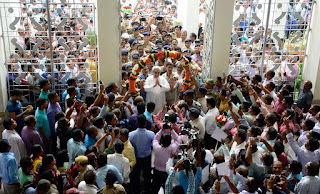 Bhubaneswar, August 29, 2017: Odisha Chief Minister Naveen Patnaik on Tuesday announced
the implementation of Seventh Pay Commission for State Government employees and
pensioners from September 1 this year.
The announcement comes at a time when the implementation of
the recommendation of the Seventh Pay Commission has been an issue amongst the State
Government and also amidst the attack from the opposition parties for delaying
in giving the Government employees their dues.
The CM said around 4.5 lakh serving State Government
employees and 3.5 lakh retired employees will get the enhanced emoluments and
higher pension, respectively from September month salary.
The State would bear an annual additional expenditure of Rs
4,500 crore on this count, added Patnaik.
“Government employees will get the hike from September month
salary onwards. The State would bear an annual additional expenditure of Rs
4,500 crore on this count,” announced Patnaik.
However, several State Government employees’ associations have
demanded that the Seventh Pay Commission recommendations be implemented
retrospectively from January 1, 2016 as done by several other States and
Central Government.
Last year, the State Government constituted a fitment
committee headed by Development Commissioner R Balkrishanan to recommend
modalities for implementation of the 7th pay commission for its employees and
pensioners after the Central Government announced its implementation for its
employees.