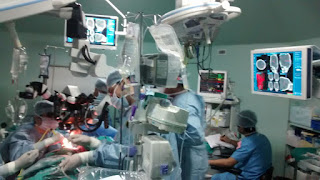 Bhubaneswar, August 30, 2017: A team of 40 doctors from AIIMS, New Delhi has successfully
separated a significant portion of the brain of Jaga and Balia, aged two years
and four months, the twins who are joined at head, and created a new venous
bypass channel in them on Tuesday during the first phase separation surgery
that lasted for over 24 hours. 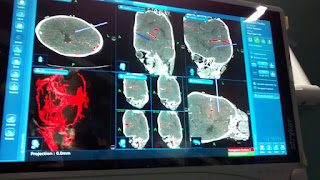 “This was the first stage of the planned multistage surgical
separation carried out at AIIMS, Delhi. A new bypass technique was used for the
first lime in conjoint twin at head. Surgery was uneventful and there was no major
bloos loss or intraoperative problems. Both the children are still united at
head as before from outside. However, a significant portion of their brain was
separated and a new venous bypass channel has been created in them,” AIIMS pediatric
neurosurgeon Prof Deepak Gupta.
Prof Gupta led the 40-memebr doctor team under guidance AIIMS
Neuroscience Centre chief Prof AK Mahapatra.
“Both kids are doing relatively well after the first phase of
separation surgery,” added Prof Gupta.
Surgical planning in this case began almost two months back
and a team of 40 doctors at AIIMS were involved in management at various stages
of planning of this extremely rare   and complex
condition of craniopagus in these twin kids.
Craniopagus is a very rare condition wherein twins are joined
at the head and have a very high risk during surgical separation. Surgical
planning was done in such a way in these twin brothers so that lives of both children
could be saved at the same time giving minimal side effects, said Prof Deepak
Gupta.
The kids will require one to two more operations within three
months time for final separation and will be kept under our observation till then.
The twins are admitted at the All India Institute of Medical
Sciences (AIIMS), New Delhi with the State Government initiative. Chief
Minister Naveen Patnaik has already sanctioned Rs 1 crore from the Chief
Minister’s Relief Fund (CMRF) for their treatment.
The twins Jaga and Balia, hailing from Nelupada under
Phingiria police station in Kandhamal district in Odisha are joined from their
heads by birth.