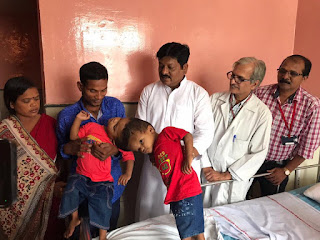 Bhubaneswar, August 28, 2017: Chief Minister Naveen Patnaik on Monday spoke to
Prof Ashok Mahapatra who is leading the 40-member team at AIIMS, New Delhi on
the surgery on conjoined twins from Kandhamal Honey alias Jaga and Singh alias
Balia.
“Prof Mahapatra assured me surgery at #AIIMS is on track
& may take another 8 hrs. I assured all help & support for treatment of
the children,” said Patnaik in his facebook page.
“I join the people of Odisha in prayers for success of
surgery & new life for the conjoined twins fondly being called Jaga-Balia.
May Lord Jagannath bless them,” added Patnaik.
The CM spoke to Mohapatra over phone.
After a keeping the twins under observation for over a month
and conducting multiple medical tests, a 40-member team of doctors, including a
specialist from Japan began separation surgery of twins today morning.
Neurosurgeon Dr Ashok Mohapatra is heading the team.
The twins Jaga and Balia, hailing from Nelupada under
Phingiria police station Kandhamal aged two years and three months, are joined
from their heads by birth. Kids with such sort of deformity, in medical terms, are
known as ‘craniopagus conjoint twins,’- an extremely rare condition found in 1
in 2.5 million births in the blobe.
Jaga abd Balia suffer from a rare condition which afflicts
one in 30 lakh children, of which 50 per cent die either at birth or within 24
hours of the birth. Surgery is feasible only on 25 percent of the survivors.
Earlier on July 19, Chief Minister Naveen Patnaik sanctioned
Rs 1 crore for the treatment of conjoined twins from the Chief Minister’s
Relief Fund (CMRF). The amount was directly given to the AIIMS Director. Health
and Family Welfare Minister Pratap Jena had also visited AIIMS and consulted
with the treating doctors.