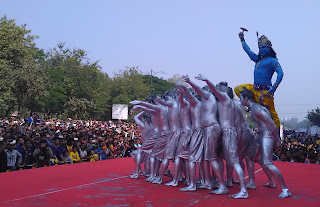 Bhubaneswar, Dec 25: While the atmosphere and the surrounding
was filled with the spirit of celebration during the celebration of Vth Patha
Utsav on Janpath on Sunday, Prince Dance Group became the crowd puller with
their signature Krishna Dance, with electrifying choreography and earthy
composition. 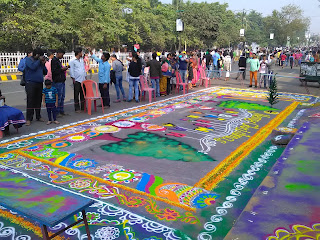 As the sons of the soil from Ganjam with the India’s Got
Talent fame descended on stage no. 1 at Patha Utsav, people started swinging to
the melodious and rhythmic beats and were speechless as the performers went
with their unique dance drama under the leadership and choreography by T.
Krishna Mohan Reddy.
Prince Dance Group is unique as the members are from remote
locations in Ganjam and most of them are from disadvantaged sections and
physically challenged. They have won the hearts of millions of Odias.
During their final round at the India Got Talent show, with
their breathtaking performance on Lord Krishna and his 10 incarnations one of
the judges on the stage, Shekhar Kapoor was mesmerised by their performance.
Earlier, during the semi-final event they performed an act with the National
flag and it brought them huge fan following across the nation.
Additional Commissioner-cum-Member Estate, BDA, Bhabani
Shankar Chayani, who is the nodal officer for Patha Utsav, said “today despite
the trend in going for outing and picnics etc, we have a strong crowd of 60,000
or more. The brand — Bhubaneswar Patha Utsav — has certainly made its mark
and today’s turnout is a testimony to that.’’
Nirmala Kruti Bikas Trust (NKBT), city-based socio cultural
group working in the field of community health, eradication of blindness, cleft
lip surgery, health-care services for the poor and tribals in the unreachable
pockets of Odisha, painted the Janpath with colours of love and affection.
Seen and `selfied’ by thousands of visitors during Patha
Utsav today, NKBT’s Rangoli and floral design was the centre of attraction for
almost all participants at the weekend event. Dillip Patnaik, founding trustee
of NKBT said “the Christmas celebration has virtually become an international
event and it spreads the message of love and affection. With this theme, just
like the colours used during Holi, we created this unique Rangoli to spread the
message of love and celebration.’’
One of the living legends on Odia music industry and singing
sensation of yesteryear Tansen Singh, defying his age and age-related
challenges, gave a romantic twist to the young and happening crowd with his
ever green number “Hai mo nachhak bali rusi tu jaa naa chali, Ei mana mora
nuhen jail, dekhana to anta bhanga chhali…’’
Robotics show for kids will was a collaborative programme at
Patha Utsav between Jawahar Navodaya Vidyalay Khurda and First Lego League
Group from a high school in Houston, USA. In the event a group of kids both
from US and JNV Khurda displayed the robotics skills to create an awareness on
the subject among local kids.  Abhinash
and Abhishek Routray, Swati Samikshya Kar, Priti Pratikshya Kar, Priyanshu Dora
and Pranati Sahoo were part of the team. Senior teacher from JNV Khurda Kabita
Kar and Chetna Samal from Houston led and guided the kids.
While the various colourful and unique designs on paper by
IAmArtist attracted many people,  Art
Godown and India Craft Nation also came with various new ideas on art and made
their presence felt at the event.
With the Christmas around the two main stages and the signage
here and there across the Patha Utsav also carried a similar mood reflecting
the ideas.
Jai Odisha, a city-based organisation working for
non-motorised transport and promoting use of more cycles in the historic city,
today offered toffees to kids while handing over them the cycles for their use
within the territory of Odisha.
Manab Adnyan Kendra, which received more than 40 requests
from people to solve their personal problems in life, today also received equal
number of dropping in their box so that the organisers would be able to answer
them back within seven days and also call them, if there is any urgent need.
Bakul Foundation today organised the reading session among kids. PECUC organised
their camp for kids. Among singers Rahul Dhal Praharaj performed on stage with
his unique presentation and style.

367 booked for malpractice in HSC exam on first day