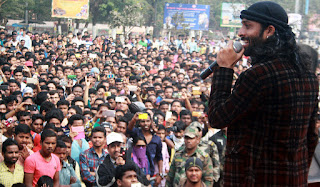 Bhubaneswar, Feb 12: When the season of love is all
around and romance is in the air, people thronged in thousands at the Janpath, the
venue for Patha Utsav on Sunday and immersed in an ocean of powerful and divine
music.
Braving the mystique and smoky environment today,
the visitors cheered the mega attraction of the day, Ruturaj Mohanty, who is a
celebrity in Bollywood and has become a household name in Odisha following his
emphatic win in the reality show India’s Raw Star. Ruturaj had a blast and the
swaying public also reciprocated to his powerful rendition “Ei Barsha” in Odia and folk number “Rangabati rangabati kanakalata hasi pade kahalo katha.”
The popular singer also sang other major numbers
like “Teri galiyan…teri galiyan…’’
and  “Mar
jau yaa jilun jaara” and left the audience with his electrifying
performance and on-stage charisma. Rururaj belongs to Belapada near Nimapada in
Puri district and former student of the city-based Sangeet Natak Mahavidyalay.
The top singer was also felicitated by BDA Vice-Chairman Dr. Krishan Kumar. He
was also given a portrait of himself by an artist associated with Patha Utsav
and also accepted invitation from the artist in Mahatma Gandhi’s attire to become
a supporter of Swachha Bharat Abhiyan movement.
Rosalin Sahoo also gave an electrifying performance
with a distinct energy level showing her versatility, stage management skills
and art to engage the crowd with her every step and word. She was a contestant
in the reality show India Idol. Local singing star Rahul Dhal Praharaj also
gave a good show. While these singers were brilliantly performing with dance
numbers in Stage I, at Stage II regular music and dance groups were seen
entertaining crowd with great efficiency and richness of their voices.

Notification keeping Vigilance out of RTI purview challenged in HC