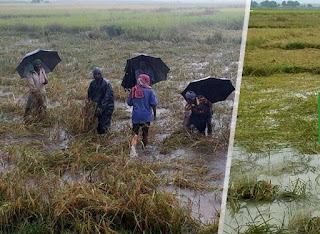 Bhubaneswar, November 29, 2017: The State Government has released
financial assistance of Rs 364.76 crore to 19 districts for
payment to farmers affected by unseasonal cyclonic rain.
The State Government has notified an area of 407100.77
hectares in 14720 villages under 2460 gram panchayats of 133 blocks and 257
wards of 38 ULBs in 19 districts as affected by unseasonal rain during November
under the influence of cyclonic depression.
The Government released the amount to Collectors of the
concerned districts for payment of agriculture input subsidy to the affected
farmers at the earliest.
As per the Norms of Assistance from State Disaster Response
Fund (SDRF) and National Disaster Response Force (NDRF), farmers, whose
agriculture/ horticulture crops are affected to the extent of 33% or above,
will get agriculture input subsidy at the rate Rs 6,800 per hectare in case of
rainfed areas and Rs 13,500 in case of areas under assured irrigation.
The assistance for farmers having land holdings of more than
two hectares will be limited to two hectares.
The districts which suffered crop damage due to unseasonal
rain during November 15-20, are Balasore, Bhadrak, Boudh, Cuttack, Dhenkanal,
Gajapati, Ganjam, Jagatsingpur, Jajpur, Kandhamal, Kendrapada, Keonjhar,
Khordha, Koraput, Mayurbhanj, Nabarangpur, Nayagarh, Puri and Rayagada.
The farmers will get the assistance in shape of Agriculture
Input Subsidy.
As per the direction of the Government, the Collectors
conducted quick assessment of crop loss through field visit of officials of the
Department of Revenue and Disaster Management and Department of Agriculture and
Farmers’ Empowerment.
They furnished their reports to the Special Relief
Commissioner.
With approval of Chief Minister the Special Relief
Commissioner on Wednesday issued the relevant notification and released the
funds to the Collectors.