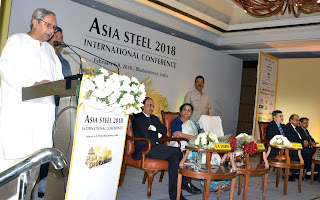 Bhubaneswar, February 6, 2018: From the installed capacity of
about four million tons per annum of crude steel in the year 1999-2000, Odisha
now has 47 steel industries with the total capacity of over 33 million tons per
annum which is about one-fourth of the country’s total installed capacity, said
Chief Minister Naveen Patnaik here.
The pellet plants in the State have an installed capacity of
about 29 million tons per annum, said Patnaik.
Patnaik was speaking at the inaugural session of the 7th Asia
Steel Conference 2018 jointly organized by the Indian Institute of Metals and
Tata Steel.
“Odisha is a mineral rich state with abundant resources of
iron ore, coal, chrome and other minerals. The State Government has been
providing support for development of mineral based Industries through adoption
of appropriate policies. Today, Odisha is producing about half of the country’s
iron ore,” said Patnaik.
Because of indigenous availability of such high grade Iron
ore, the critical input for steel making, Odisha has a competitive advantage
for production of Steel, added the CM.
“The National Steel Policy-2017 envisages the increase in per
capita steel consumption from the present level of 61 Kg to 158 Kg by
2030.  My State is aiming to contribute
substantially to this national target.
Both the steel manufacturers and the Government have to work in tandem
to achieve this objective,” said Patnaik.
Maintaining that Odisha was the first State in the country to
auction iron-ore block under the amended MMDR Act and three iron-ore blocks
have already been auctioned and four more blocks are being readied for auction
in the coming months, the CM invited the steel makers to participate in the
auction for ensuring their raw material security.
Information Technology Enabled Services have been adopted by
Odisha in a big way.  Odisha became the
first State in the country to integrate industrial approvals with the e-BIZ
platform.  The State’s Central Inspection
Framework for Industries has been recognized as one of the best practices by
the Government of India and the World Bank, added Patnaik.
“A National Investment and Manufacturing Zone is being
developed at Kalinganagar, spread over 160 square kilometers, the Zone is
envisaged to become a self-contained ecosystem along with residential,
commercial and social amenities.  It will
enable the potential investors to set up value added downstream industries,”
informed Patnaik.
Among others, Union Steel Secretary Dr Aruna Sharma, Asia
Steel International Conference Chairman AnandSen, Indian Institute of Metals president
Dr Biswajit Basu attended the event.