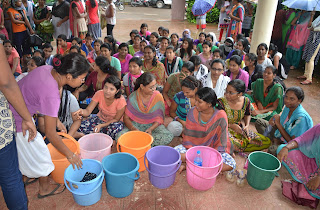 Bhubaneswar, July 26: Girl
students staying in hostels at the Utkal University here on Tuesday hit the
streets, protesting against frequent power cuts and drinking water problems in their
hostels.
The protesters, holding
empty buckets, held a rally inside the university premises and staged a
demonstration outside Vice-Chancellor’s office and gheraoed the VC Dr Ashok Das
for hours, demanding prompt measures on their grievances. 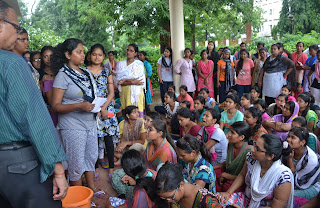 They raised slogans against
the hostel authorities and accused latter of failing to ensure basic civic
amenities to the hostels of one of the premier institutes of the State.
Aggrieved girl students
of Utkal University staged a dharna in front of the Vice-Chancellor’s (VC)
office here holding empty buckets in their hands in protest against poor water
and electricity supply to hostels.
The protesting students
demanded round the clock electricity and water supply in the hostels and repair
of the hostel roads and other infrastructures at the earliest.
“We have been writing
to the hostel authorities about our grievances more than a hundred times. We
even raised poor water and electricity supply issue to hostel the issue with
concerned authorities several times, but nothing tangible has happened as yet,”
said Utkal University Girls’ Hostel general secretary Madhu.
She alleged that their studies
are being hampered due to frequent power cuts and poor water supply.
Around 1,100 girls are
staying in five ladies hostels in the university campus.