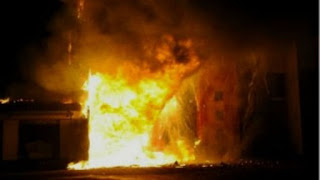 Bhubaneswar, Sep 24: The death toll in Nayagarh cracker
factory explosion mounted to six as four more succumbed to their injuries while
undergoing treatment at SCB Medical College and Hospital, Cuttack on Saturday.
Four who died in the Hospital on Saturday are Prafulla Kumar
Sahu (45), Trinath Naik (70), Laxmidhar Mohapatra (38) and Loknath Mohapatra
(50) and all of them belong to Nayagarh district and were cracker manufactures of
the ill-fated cracker factory at Itamati village in Nayagarh district.
Meanwhile, condoling the loss of lives in Itamati fire
cracker factory explosion, Chief Minister Naveen Patnaik on Saturday announced
ex-gratia of Rs 2 lakh each to the kin next of the deceased.
The State Government is bearing the cost of the treatment of
the injured, hospital sources said.
The owner of the cracker factory Dhaneswar Sahoo was arrested
by Itamati police and forwarded to court. He said that the reason behind the
explosion was lightning.