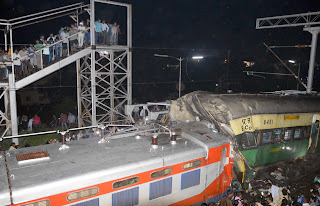 Bhubaneswar, Sep 30: S
Nayak, Commissioner of Railway Safety, South Eastern Circle, Kolkata under
Ministry of Civil Aviation will hold a statutory inquiry into Thursday’s train
accident at the Kathajodi station near Cuttack which left two dead and many
injured.
The inquiry will
commence from on Monday at 10 am at Officers Rest House, East Coast Railway,
Cuttack near Cuttack Railway Station till 1.30 pm. Later, the inquiry will
start from 3.30 pm till its completion at East Coast Railway (ECoR)
headquarters.
As part of its
investigation, any member of public or eyewitness of the mishap can record
their statement or provide evidence relating to the accident.
“They may also write
to Commissioner of Railway Safety, South Eastern Circle, New Koilaghat
Building, 14 Strand Road (12th Floor), Kolkata-01,” said an ECoR release.
Meanwhile, the ECoR
has announced ex-gratia compensation to the family members of the deceased.
ECoR CPRO JP Mishra
said an ex-gratia of Rs 50,000 would be provided to the family of each deceased
while the critically injured would receive Rs 25,000 each and Rs 5,000 each
would be given to the persons who have sustained minor injuries in the
accident.
Meanwhile, 19 persons
injured in the accident have been discharged after primary treatment from the
SCB Medical College Hospital, Cuttack. Now, at least 17 critically injured
persons are undergoing treatment at the SCB. Out to the 16 critically injured
persons, six are women.
Meanwhile, the ECoR
suspended four officials who were on signal duty when the Bhubaneswar-Bhadrak
DMU rammed into a stationery goods train at the Kathajodi station.
The four officials are
loco pilot Sanatan Das, Assistant loco pilot Jyoti Ranjan Das, loco inspector
Upendra Kumar Behera and senior goods guard PC Sethi.