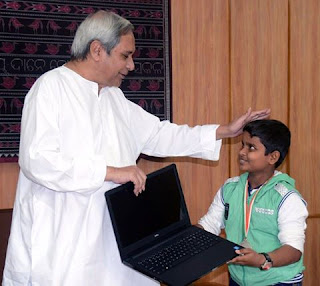 Bhubaneswar, Dec 9: Chief Minister Naveen Patnaik on Friday felicitated
young scientist Subhendu Sahoo of Hinjili, Ganjam for innovation in the field
of agriculture.
Device invented by Subhendu is capable of seven different
agricultural function like tilling and sowing and has won him Child Award for
Exceptional Achievement from President Pranab Mukherjee.
Chief Minister lauded his creativity and wished him the very
best for the future. The CM also presented a laptop to the boy.
Shubhendu, a Class VIII student of Somapur Project Upper
Primary School in Hinjili, the Assembly constituency of the Chief Minister, had
prepared a science project titled ‘Gift for Farmers’ which got selected for the
national level award.