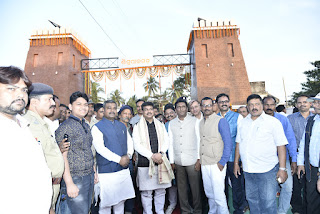 Bhubaneswar, Dec 10: Union Petroleum and Natural Gas Minister
Dharmendra Pradhan on Saturday inaugurated a Heritage Gate of the historical
city of Sisupalgarh and distributed assistive devices to over 100
differently-abled persons of Cuttack district. 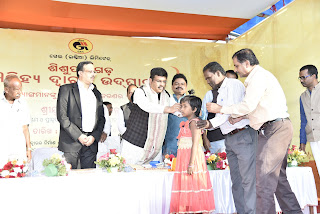 The construction of the Heritage Gate at a cost of Rs 50 lakh
and free distribution of assistive devices to Divyangjan were carried out under
Gas Authority of India Ltd’s (GAIL) corporate social responsibility
initiatives.

“The Heritage Gate will be a reminder of the rich glory and
heritage of Sisupalgarh and help promote tourism and economic growth of the
region,” said Pradhan.
Excavations at Sisupalgarh provide evidence that this was the
legendary city of Kalinganagara and the ruins go back to as early as 3rd
century BC. The city pre-dates the Mauryan era and even finds mention in the
ancient Indian treatise Arthashastra.
The Union Minister distributed 28 motorised tricycles, 14
tricycles, 34 wheel chairs, 24 BTE hearing aids, two Rollators, a tablet and a
Daisy Player along with batteries to identified beneficiaries of Cuttack
district.
“These aids and devices shall not only be a major help and
support to the people of the region with disabilities but also give them hope
for a better life,” added Pradhan.
GAIL Director (HR) M Ravindran was present.

Job-fair for disabled, hearing impaired on Aug 8 at VRC campus