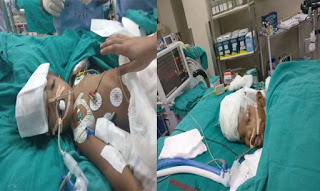 New Delhi/Bhubaneswar, October 30, 2017: The condition of Kandhamal’s conjoined
twins Jaga and Kalia, who were successfully separated on Wednesday after a
marathon surgery that lasted around 16 hours at the AIIMS, New Delhi, is “stable”
and they are ‘slowly’ improving, informed AIIMS doctors.
The twins are still in ICU.
“Jaga and Kalia operated on October 25 at AIIMS, are still in
ICU. A team of 15 consultations and 10 residents are looking after this case under
the supervision of Professor AK Mohapatra and Dr Deepak Kumar Gupta. They are looked
after by Plastc Surgeons. The condition is stable and babies are slowly
improving,” said a press release issued by the Media and Protocol Division of
AIIMS, New Delhi.
“Both the babies are also looked after by Plastic Surgeons. Breathing
is good and hemodynamically stable. They are looked after by Neuroanaesthetists
and Neurosurgeons 24*7 and dedicately supported by Paediatric Intensive care Specialist,
Paediatric Cardiologist, Paediatric Neuro and Paediatric Nephrologists,” it
added.
“Jaga is showing response to some command and on dialysis to
support his compromised kidney function. They are still very sick and will have
to stay in ICU for 7-10 days or longer depending on need,” it added.
Jaga and Kalia are joined from their heads by birth. In
medical term, kids with such sort of deformity are known as ‘craniopagus
conjoint twins.’ It is an extremely rare condition found in 1 in 2.5 million
births in the world. Such deformity afflicts one in 30 lakh children, of which
50 per cent die either at birth or within 24 hours. Surgery is feasible only on
25 per cent of the survivors, while the rest continue to live with the
condition.
Odisha Chief Minister Naveen Patnaik on July 19 had
sanctioned Rs 1 crore for the treatment of the twins.